Bright Eye, Winter Night 2, 354 AC
Blood poured freely from a crack in the skull of the defeated cleric. Cherry ran over and kicked the fallen foe in the groin as Gharad cut off the cleric’s head with a single swing. The blow echoed through the chamber.
Chai shook his head as the burn form the medallion ceased. He raised the offending object and stared at it for a moment. Engraved into the medallion was the holy symbol of Morgion; a hood with two red eyes. The red eyes sparked at Chai, and for a moment he felt as if the eyes were staring directly into his soul. As the moment passed Chai again shook his head before tossing the medallion next to the kender and sat up.
Cherry smiled and picked it up, secreting it away inside of one of her many bags.
“I take it he is dead,” Chai said as he stood up. He took a scan of the room. “What did he want here? I see no alter.”
“Could be something in these crates,” Cherry offered. One portion of the room did indeed hold a series of crates. Chai could tell by the lack of dust or mold growth that they were the newest edition to the room. The kender was already poking and prodding at them attempting to get them open. Odren stood beside her and Chai could swear the dwarf was mumbling some nonsense about crate demons.  Between the two diminutive humanoids opened the top of the crate causing the lid to fall tot eh ground with a clatter.
“Silently fools,” Chai hissed while he And Gharad watched the kender and dwarf, “we have no way of knowing what creatures could still be lurking.”
Odren spun toward the door. Paranoia and suspicion burned in his eyes. Cherry merely nodded as she pulled a bottle from the. The kender turned the bottle over in her hands and examined from end to end, only stopping to focus on a symbol etched into its side. With her thumb she popped the cork on the top.
“Excellent,” Chai whispered to Gharad, “we will find out what that potion does and we won’t have to force either of them to drink it.”
Gharad nodded.
The scent of the potion within the bottle reached Chai faster than he would have thought. It was both bitter and sweet.  It was a smell vaguely familiar to the cleric of Chemosh, though he could not place it.
Cherry placed the bottle to her mouth and sipped it and fell to her knees.
Odren spun around once more, this time facing Cherry. “What is it lass? DO the demons have you? Where are the demons? Can you see them?”

“I don’t know,” she sputtered, “it was a warmth a warmth in the pit of my stomach. IT spread fast and now…” Cherry tapered off as her ability to speak was lost in a bout of coughing. The coughing turned to vomiting as a red poured from her mouth and out of her nose.
A red paste that Chai noticed looked very similar to the dust and the wall mold.
Posted by Jmags at 9:42 AM No comments:

The cleric shook his head at the crazed dwarf and crept to a nearby corner. He peeked around the corner, holding his hand up. Gharad nodded and grabbed the dwarf’s shoulder. The cleric’s caution was rewarded as he spied two more hobgoblins harvesting mold from the walls. They had either not heard the fellows or they didn’t care. Chai held up two fingers for Gharad. Gharad once again nodded and with his free hand loosed his blade in its scabbard.

Gharad silently joined the cleric, a firm look from the two humans seemed to encourage Odren to stay silent and for that Chai gave a small prayer to Chemosh.

“What is it?” Gharad muttered as soft as the cave and his voice allowed.,

“Two more Hobgoblins,” Chai answered, “For some reason they did not leave with the others.”

“Perhaps we can encourage them like the others,” Gharad replied. Odren stuck his head around and looked as if he were about to say something but changed his mind with another withering glance form Chai.

Chai nodded at Gharad. “I shall at least try. Though it is kind of odd they didn’t hear us.”

Chai squeezed his medallion of faith and stepped around the corner.

“Hobgoblins,” Chai began as he started to walk toward the pair of creatures. It was easy to forget how imposing these creatures could be until you felt yourself being stared down by them. A distant cousin of goblins, hobgoblins seem to excel in being the polar opposite of their kin. Hobgoblins were tall where goblins were short and strong where goblins were weak.

As the pair turned toward the cleric he could see they wore what had become the standard tattered red Dragonarmy uniforms. But these two were different. Their eyes were cloudy and their faces covered in boils many of which had burst open to reveal a black oozing puss.

With tools no longer scraping at the mold on the walls Chai could hear rasping. These creatures were not undead, but stuck in a living torment of disease.
The cleric swallowed and once more prayed to Chemosh, thankful he had covered his mouth earlier. The pair stared at the cleric, as if considering his existence and what it meant. Their heavy breathing echoed throughout the hall.

Chai looked each one in the eye, covering the fear he felt deep in the pit of his stomach. Some disease even a cleric cannot cure after a certain point. He cleared his throat to address the pair. "Step aside. I was told of free passage to your master."

The hobgoblins began to wail as they charged the cleric. The first to reach the cleric of Chemosh clumsily swung its great axe only to miss and gouge the stone floor. The second hobgoblin had slowed its charge as it dragged its axe on the floor, making its way to Chai.

“What did you say?” Gharad asked as he stepped around the corner with his blade drawn, Odren following close behind.

“Nothing you didn’t hear,” Chai snapped back as he focused his attention on his medallion of faith. 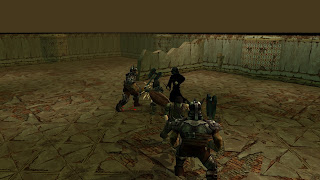